How Safe is Your Hospital?
X

In order to continue...

Please accept the Terms of Use in order to search for hospitals.

In order to continue...

Please specify the search criteria in order to search for hospitals.

We are happy to help members of the press inform the public about the Leapfrog Hospital Safety Grade. For interview requests or additional information for print, electronic and broadcast journalists, please contact:

If you are a hospital looking for a template press release to announce your Leapfrog Hospital Safety Grade, please contact PR@leapfroggroup.org.

< Back to the newsroom

Washington, D.C., October 28, 2015 – Hospital Safety Scores, released today by The Leapfrog Group, shows key shifts among many hospitals on the letter grades rating them on errors, injuries, accidents, and infections, indicating the importance for consumers to check their local hospital’s score. Of the 28 measures used to calculate the A, B, C, D or F grades, on average, hospital performance improved on eight measures, but average performance declined on six measures.
But there are more encouraging signs within the data: hospitals taking steps to make safety a priority, and showing some encouraging results—either by consistently maintaining an “A” score, or by raising a lower score to an “A” over time. Since the launch of the Hospital Safety Score in 2012, 133 hospitals have earned an “A” in each of the twice-annual updates of the Score—approximately 5 percent of all graded hospitals.
“Taking a deeper look at the 133 ‘Straight A’ hospitals reveals a diverse group, similar only in their consistent commitment to patient safety. Hospitals from across the country, with 100 beds to over 750 beds, non-profit and for-profit alike received this top honor,” said Leah Binder, president & CEO of The Leapfrog Group, which issues the Hospital Safety Score. “No matter how large or small, no matter what kind of community they serve, all hospitals have the potential to give their patients this high level of safe care.”
Included in the list of “Straight A” hospitals are three hospitals in the Baptist Health South Florida system, Chicago’s Rush University Medical Center and University of Chicago Medical Center, and Baystate Medical Center and Beth Israel Deaconess Medical Center in Massachusetts.
Binder observed that among hospitals without a perfect track record there are hospitals showing significant improvement. Beckley ARH Hospital, part of the Appalachian Regional Healthcare System in Beckley, West Virginia made one of the most significant jumps ever indicated in the Hospital Safety Score data. From receiving a “D” in Spring 2015, they now are receiving an “A” grade for keeping their patients safe. This hospital now has top scores in Computerized Physician Order Entry (CPOE) and all five measures of safe surgical practices (Surgical Care Improvement Program measures). They also made radical improvements in their scores on Falls and Trauma, the five Patient Safety Indicator measures, and have a rate of zero for central line infections. 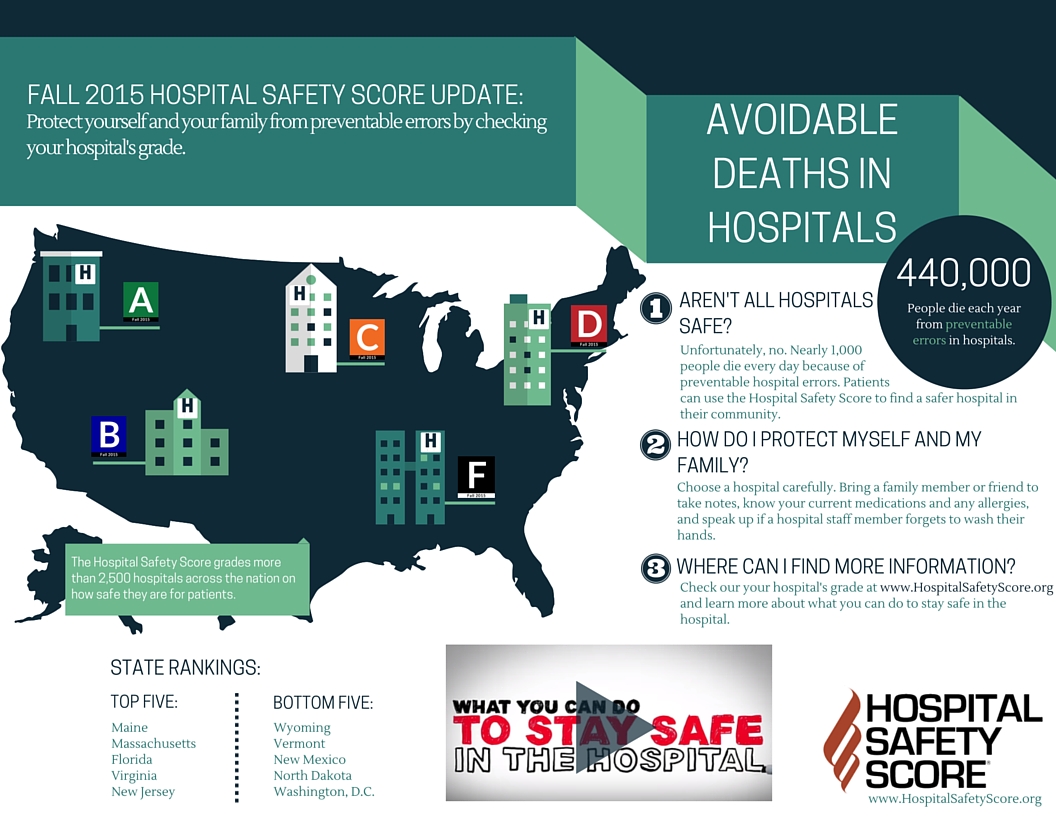 “Although no hospital is perfect, our family members, neighbors and colleagues deserve the safest care possible,” Binder added. “We urge consumers to put safety first when planning a hospital stay, and we urge hospitals to double down on their commitment to safety.”
Despite the powerful stories of improving and high-performing hospitals, improvement across the board remains elusive. The Fall 2015 update shows a number of positive trends for certain hospital-acquired conditions and safety measures, but hospitals are performing worse on critical measures like foreign objects left in after surgery. Overall, performance on safe practices and process measures varied greatly.
Additional Key Findings:
The Hospital Safety Score assigns A, B, C, D and F grades to more than 2,500 U.S. hospitals twice per year. It is calculated by top patient safety experts, peer-reviewed, fully transparent and free to the public. For more information about the Hospital Safety Score or to view the list of state rankings, please visit www.hospitalsafetyscore.org. To learn how employers are footing the bill for hospital errors, visit Leapfrog’s Cost Calculator. Journalists interested in scheduling an interview should contact LeapfrogMediaGroup@sternstrategy.com.
About The Leapfrog Group
Founded in 2000 by large employers and other purchasers, The Leapfrog Group is a national nonprofit organization driving a movement for giant leaps forward in the quality and safety of American health care. The flagship Leapfrog Hospital Survey collects and transparently reports hospital performance, empowering purchasers to find the highest-value care and giving consumers the lifesaving information they need to make informed decisions. Hospital Safety Score, Leapfrog’s other main initiative, assigns letter grades to hospitals based on their record of patient safety, helping consumers protect themselves and their families from errors, injuries, accidents, and infections.
Back to top